Time//process ; giving birth to a project becomes a meeting that wants to create another one.

139 Artspace offers to artists a window-space where to show art to the street 24/7.

4 different poetics, stories and processes which met during the time trying to offer reflections about the courses, about growth, changes, the vital process of connecting in different ways.
The story written by obstacles and walks told from different points of view, by artists which had chosen to work together for that occasion using different mediums, foto,sculpture,performance.

Showing in the window:
Under glass / for two months till to the 27th of july artworks by Maria Claudia Farina, Marco Ciuffetta, Franko B and Sara Ciuffetta. 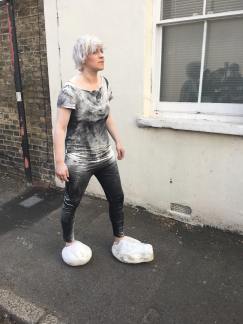 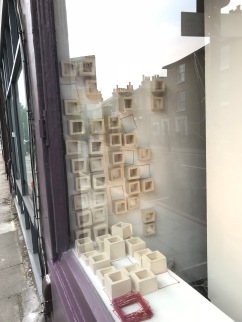 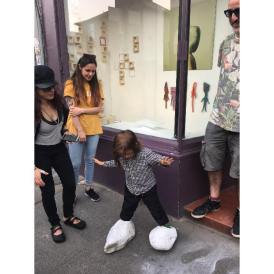 I moved to London in January 2018, after winning a scholarship to study in Franko B atelier. To pay the bills, in the evening and during weekends I worked in a Pizza place.

This work tells about every day of my stay in London.

112 are the days I worked in London, 64 in the Pizza place and 80 in the atelier with Franko B. I worked twice a week in both situations.

I used the shape of a 10cm square to represent my working days in London and I used to materials to define the difference between them: ceramic and a red cotton thread.

The difference between the two materials is about the weight and the obstruction they create. Heavy the ceramic ones, really light the one made by thread. This represent how I psicologically felt about the two different tasks in my english experience.

288 million are the km the earth covered in the orbit around the sun, during my whole stay in London. This is a distance which is impossible to cover for a human being, but actually being part of the Earth, we can say we did it. Thanks to this experience I feel like I made many progresses in my career, personally and professionally. I do feel like I covered those 288 million hm.

Both works are generated from one thought:

Every action can represent both freedom and slavery.

It is up to us to put actions together not to be tricked. Quite often, it is enough to step back.

In “The magnificent seven”  each one of the charachters have some specific powers, that’s why they all need each other.

Everyone can help and only all together they can destroy the enemy.

In this work, “The magnificent seven” are actually five. There is clearly something missing. Either they did not arrive yet, or they are hiding somewhere. This represent humanity, uncertainty, symbolic wounds as memories through the whole life. It is a mental unique condition.

These works were created in 2014 from a research which connects  sculpture with the body.
this study develops in 2015/16 through photographs with the work “I dress up as a stone” and becomes then a performance with “Walking the day”. In the series “I dress up as a stone” the artist wears a marble helmet, which originally was a river stone as big as the head.
This stone was emptied and used as a helmet in a series of phoographs. The artist is the protagonist in the pictures, busy in daily situations or posing, as in the picture “I dress up as a stone 1” (the picture you can find in the exhibition). The characteristic of the stone which is meaningfull to this work, is the naturalness. As we often forget about our naturalness, wearing the helmet helps us to find this. Forget about the world, focus on ourselves, get closer to nature or get rid of all those thoughts that sometimes can brake our balance. Marble is not just the element that allows connection with nature. It connects with sculpture history as well,  with the monumentality of the artistic creation first, and the nature itself as well. Nature reveal itself by showing signs of time on its surface.

In 2017 the project about performance starts, through “Walking the day” two empty stones turn themselves into shoes.
This work highlight another characteristic of the stone: the heaviness, and the hard work behind working it. The beginning of the performance, sees the artist being showered by marble powder. Then I wear the two stones as if they were shoes, and I walk in them through a long path. Sometimes to stick to projects, ideas, it is a difficult path. Heavy shoes are difficult to wear and uncomfortable. Managing to walk in the struggle, means moving forward anyway, despite the difficulties and believing in what you are doing

Marco Ciuffetta (Sora-FR, 1988). Has a degree at “Art Institute” of Sora and “School of Fine Arts” of Frosinone. From September 2016 until January 2017 he studied sculpture at “Academy of Latvia” – Riga.

Since 2013 he attended lot of sculpture workshops at “Campo dell’Altissimo”, Saravezza (LU). From 2013 until 2017 he exhibited at “Galleria of Kunstvere” in Hechingen, Germany;  at the permanent exhibition in Flayosc, France; “Albertina” Academy in Turin; “Complesso Valentianum”, Italy ; “Palazzo Tiravanti”, Italy; “Villa Schiff”, Italy, Chamber of Commerce, Italy. He takes part of the first sculpture national symposium in “Vezza d’Oglio”, and the first sculpture national symposium in Segni, Rome, as assistant of the artist Attila RathGeber. Since January 2018 he has been working in London, in Franko B atelier..

Maria Claudia Farina  after her degree in sculpture in the School ofFine Arts in Carrara in 1989, she spent long time in Germany, discovering a different way of doing arts.

She worked all over the world: Israel, Colombia, Turkey, Egypt, Norway, Montenegro. The outcome is lot of experiments, knowledge, and creation of great works. In 2007, her friendship with the sculpture Paul Schneider, brings a new influence in her art. The most common material in her works, is the stone.

She has been a teacher in “Sommerakademie”, in Campo dell’Altissimo, since 1999.

In 2003 she started to work as a marble techique teacher in the School of Fine Arts of Frosinone. In 2015 she moved to Tourin, where she teaches now.

Franko B was born in Milan and has been living in London since 1979. In 1990 he started to work as an artist with videos, photographs, performance, painting, sculpture. He exhibited to the Tate Modern, to ICA, to South London Gallery and in Beaconsflield. He worked outside of UK aswell, exhibiting in Mexico City, Milan, Amsterdam, Copenhagen, Madrid, Vienna, Brussels, Warsaw, Dublin, Siena. He has been the protagonist of monographs like “Franko B” (black dog publishing 1998), “Oh lover boy” (2001), “because of love: Franko B’s story” (2018). He published a photography project called “Still life” (2003). His own body is the subject of his works. He uses it as an expression, as a representation of all our obsessions. He does this destroying all the shame and limit that our society impose on us. He works in London, he teaches sculpture at the School of Fine Arts in Turin and he is a visiting lecturer at the Royal College of Art, London.

SARA CIUFFETTA (Sora – FR, Italia, 1985). She has a degree at the “Art Institute” of Sora and the School of Fine Arts in Frosinone, specialising in painting. She works with painting, sculpture, graphics, and recently got interested into photography and perfomance.